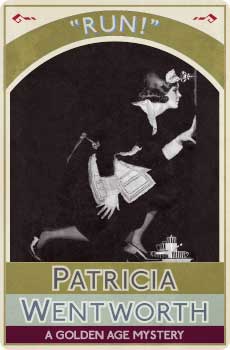 “You told me a lot of things,” said James grimly. “Most of them weren’t true.”

“You told me a lot of things,” said James grimly. “Most of them weren’t true.”

James Elliott, lost in a fog, comes upon a lonely house in the English countryside. The house shows no lights but the front door is ajar. He enters in search of a telephone but instead finds a girl whose white face, eyes wide in a stare of horror and mouth open as if to scream. But instead of screaming, she yells ‘run!’ At that moment there is the sound of a shot and James feels the wind of a bullet as it goes past. Though he rescues the girl, she cannot – or will not – tell him quite where the danger lies…

Is the girl’s name Aspidistra Aspinall, as she originally claims? Or perhaps it’s Sally West, as she later styles herself, when revealing that bestselling author Ambrose Sylvester may have passed off a dead man’s work as his own. The girl’s fear is real enough, and for good reason – someone is playing for high stakes, and another corpse has been left to prove it. But will James himself turn out to be the intended victim?

“When I pick up a book by Patricia Wentworth I think, now to enjoy myself – and I always do.”Mary Dell, DAILY MIRROR