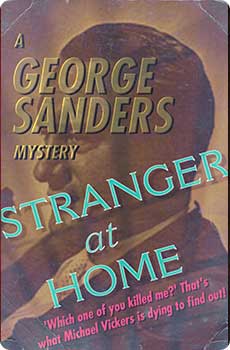 Which one of you killed me? That's what Michael Vickers is dying to find out!

Four years. That’s how long Vickers spent battered, bruised and south of the border, following the attack which sought to end his life – all because he’d mistaken a mortal enemy for a friend. Or a lover.

And now Vickers is looking for four years’ worth of payback from the devil responsible for his near-demise. But within days of Vickers’ return, a murder attempt is made on one of his suspects – and this time it succeeds. Enter a very shrewd detective, whose eyes are on everyone. Especially Vickers.

In Stranger at Home, the second George Sanders mystery novel, we are taken to a world removed from the backstage comic mystery of Crime on My Hands, but nonetheless a milieu very familiar to the actor – Southern California in the 1940’s. A world of stars and millionaires, but also vice, organized crime and shattered dreams. And Michael Vickers himself is a hero very much after the mould of Sanders’ irresistibly attractive screen persona – gilded and charming, languid and pleasure-seeking... but with a steely, remorseless core.

'The characters are hard-boiled, the language colorful and the solution elusive.' St. Louis Post-Dispatch

'A first class whodunit of the tough school.' Richmond Post-Dispatch

'The characters are varied and intriguing, the tale moves along at a gallop and the style is crisp and effective.' Columbus Dispatch