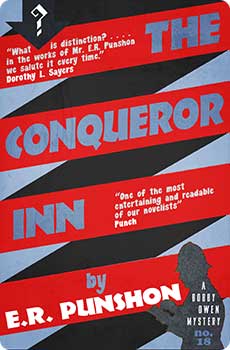 “I wouldn’t come any nearer if I were you. It’s not a thing to see unless you have to.”

“I wouldn’t come any nearer if I were you. It’s not a thing to see unless you have to.”

The remote Conqueror Inn, possibly the oldest licensed house in England, has an unexpectedly key role to play in World War Two. Lorry drivers, army camps, black marketeers and even the IRA become entangled in the sinister web which draws this novel’s plot together. Bobby Owen, after finding a case of banknotes, has to identify a corpse mutilated in its grave, ignore the red herrings thrown in his way … and identify a ruthless killer who uses the confusion of war to conceal his tracks.

The Conqueror Inn was first published in 1943, the eighteenth of the Bobby Owen mysteries, a series eventually including thirty-five novels. This new edition features an introduction by crime fiction historian Curtis Evans.

“[An] impressive baffler by one of the better English practitioners.” New York Herald Tribune Book Review

“One of the foremost British thriller-writers here gives us a first-class mystery, replete with creeps, thrills and tingles of foreboding as one grim scene builds into another and suspicion is expertly thrown in turn against each actor in this sinister drama of greed and hate couched in wartime datelines. … A better tale of dark deeds would be hard to come by.” Hoofs and Horns