A Talent To Amuse: Noel Coward 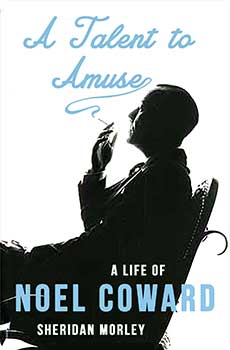 “Forty years ago he was Slightly in Peter Pan, and you might say that he has been wholly in Peter Pan ever since.” Kenneth Tynan (writing in 1953)

Noel Coward, ‘the master’, is one of the most remarkable figures in the history of twentieth century entertainment. Prodigiously talented, he blazed a trail through theatre, film and song on both sides of the Atlantic. In the theatre he wrote hit plays like The Vortex, Private Lives, Hay Fever, Cavalcade and Blithe Spirit. On film he wrote the war classic In Which We Serve and the timeless love story Brief Encounter. His songs, which number into the hundreds, include ‘Mad Dogs and Englishmen’, ‘I’ll See You Again’, ‘A Room with a View’, ‘The Stately Homes of England’ and ‘Mrs Worthington’.

His greatest creation may even have been himself – what Time called ‘a sense of personal style, a combination of cheek and chic, pose and poise’. This led to his increasing celebrity on American television in the 1950s and in a series of wildly successful one-man shows in Las Vegas, not to mention his popularity as a character actor in the last decade of his life. But as this shrewd biography shows, Coward also suffered, throughout his career, from accusations that he was squandering his gifts for the sake of superficial acclaim. Was his merely ‘a talent to amuse’? Rather than allowing such a claim to stand, this biography reveals the man as an innovator, enduring influence and immortal in the worlds which he sought to conquer.