The Other Side Of The Moon: David Niven 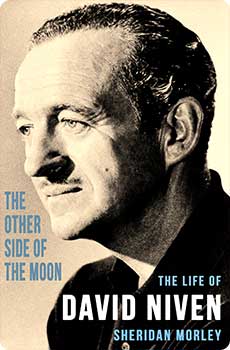 Sheridan Morley wrote this biography of the consummate on-screen English gentleman after speaking to over 150 of Niven’s friends and colleagues (only Rex Harrison refused). The result is a picture which both supports and contradicts the charming vagabond persona depicted in Niven’s own bestselling memoirs.

While millions throughout his life were enchanted by Niven’s happy-go-lucky charisma and world-class anecdotage, he was in many respects a private figure, haunted by a fear of failure, and a victim of several key tragedies in his personal life. Morley’s biography is a warm, appreciative but perceptive account which captures both sides of one of Hollywood’s most enduringly lovable figures.

‘A compassionate account that goes past the blithe persona … yet, there is much humor—the actor’s and his biographer’s—in this notable book’ Publishers Weekly

‘Head and shoulders above the average showbiz biography … He understands many of Niven’s deeper feelings’ John Mortimer, Sunday Times

‘A well-told story … the darker side as well as the mask of a complex and perhaps desperate character. He was a life-enhancer off-screen as well as on’ The Times