The Crime At The Noah’s Ark 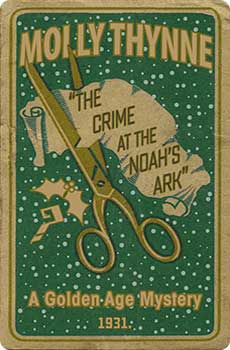 A number of parties heading for a luxurious holiday spot, are forced by severe winter weather to put up at the ‘Noah’s Ark’, a hostelry they will share with Dr. Constantine, a shrewd chess master and keen observer of all around him. Other guests include bestselling novelist Angus Stuart, the aristocratic Romsey family, a pair of old spinster sisters, and a galloping major whose horseplay gets him into hot water – and then gets him murdered.

Who is the masked intruder who causes such a commotion on the first night? Who has stolen Mrs van Dolen’s emeralds, and who has slashed everyone’s (almost everyone’s) car tyres? And are the murderer and thief one and the same, or are the guests faced with two desperate criminals hiding in plain sight in the snowbound inn? Dr. Constantine, aided by two of the younger guests, is compelled to investigate this sparkling Christmas mystery before anyone else ends up singing in the heavenly choir …

The Crime at the ‘Noah’s Ark’ was first published in 1931. This new edition, the first in many decades, includes an introduction by crime fiction historian Curtis Evans.