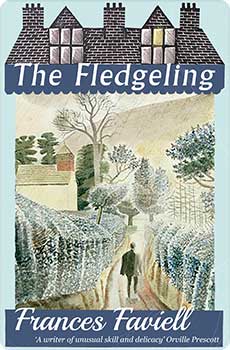 Neil Collins is going AWOL from his National Service – for the third time. Twice he has served time for previous desertions and been sent back, despite being hopelessly unsuited to military life. This time, terrorized by a bullying fellow soldier determined to escape himself, Neil intends to make his escape a permanent one. He heads to London, to the dreary, claustrophobic rooms where his twin sister, Nonie, and their dying grandmother live, periodically invaded by prying neighbours, a little girl who has befriended Mrs Collins, a curious social worker, and other uninvited visitors.

The Fledgeling (1958) traces the single day following Neil’s desertion, and its impacts on Neil, Nonie, the tough-as-nails Mrs Collins, and others. Each of the characters comes vividly alive in Faviell’s sensitive and observant prose. At times containing all the tension of a thriller, at others a profound drama of familial turmoil, Faviell’s third and final novel is dramatic, compelling, and emotionally wrenching. This new edition features an afterword by Frances Faviell’s son, John Parker, and additional supplementary material.

‘She writes with a sharpness of outline which would not shame Simenon.’J.W. Lambert, Sunday Times