A House On The Rhine 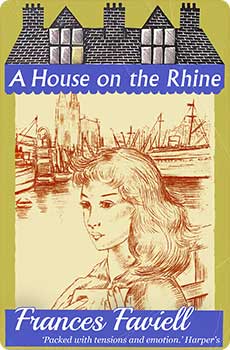 The rubbish in the once-lovely garden, the broken toys, the bicycles against the toppling fence, the neglected, trampled flower-beds – all were highlighted by the merciless midday sun. The house itself, with paint peeling, tiles missing from the roof, its pretentious pillars pitted with gunfire, looked forlorn and neglected. But nothing could detract from the beauty of the acacia trees whose proud flowering dominated the scene and apologized for everything.

Having made her publishing debut with The Dancing Bear, a superb memoir of life in Berlin immediately after World War II, Frances Faviell applied first-hand knowledge to fiction, telling the riveting, harrowing tale of one large, troubled family in Germany nearly a decade after the war’s end.

In a town near Cologne, rebuilding is proceeding at a frantic pace, factory work is plentiful and well-paid, and the dark days of near-starvation have ended. But Joseph, a former Allied prisoner of war, and his enormous brood—his wife having received a medal under the Nazis for bearing more than 10 children—face new problems including the mother’s infidelity, the oldest child’s involvement with a brutal youth gang leader, and a beloved adopted daughter’s plans to marry an American soldier.

Vividly portraying the love and conflict of a large family and the dramatic, sometimes tragic social change of Germany’s postwar recovery, A House on the Rhine is a powerful, heartbreaking tale from the author of the London Blitz memoir A Chelsea Concerto. This new edition includes an afterword by Frances Faviell’s son, John Parker, and additional supplementary material.

‘She writes with a sharpness of outline which would not shame Simenon.’ Sunday Times