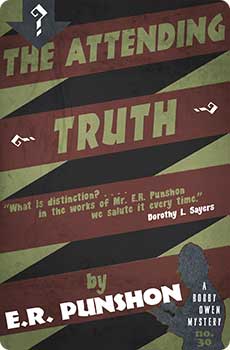 “It’s murder all right; no one could bash his own head in the way this chap’s was.”

“It’s murder all right; no one could bash his own head in the way this chap’s was.”

The stranger’s body was discovered by businesswoman Mrs Holcombe, the unofficial queen of Pending Dale. As if there wasn’t enough gossip rife in the village, now the Queen may be under suspicion of murder.

Talk is cheap, but reputations are valuable – but were they worth buying silence at the cost of a man’s life? When Bobby Owen of the Yard arrives in Pending Dale to investigate, amid a panoply of local characters and red herrings he discovers a compelling and unpredictable motive. A reason why the unassuming and anonymous commercial traveller had to die …

The Attending Truth is the thirtieth novel in the Bobby Owen Mystery series, originally published in 1952. This new edition features a bonus Bobby Owen short story, and an introduction by crime fiction historian Curtis Evans.