The Case Of The Monday Murders 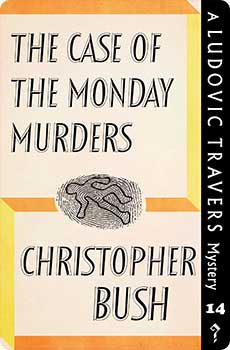 Murder on Mondays! Greatest prophecy of the century! T.P. Luffham was murdered!

Murder on Mondays! Greatest prophecy of the century! T.P. Luffham was murdered!

Ferdinand Pole of the Murder League claims that, since 1918, thirteen murders have been committed on a Monday. A sleazy economist has now been slain, followed the next week by a blameless actress—both on Monday. While the press have a field day, it is up to Inspector Wharton of Scotland Yard, along with his inspired amateur co-investigator Ludovic Travers, to see if London has a new Jack the Ripper at work. The eccentric parrot-owning Pole seems to be out to implicate himself in the murders, though whether this is bravado or fact remains very much in question . . . This sly, often satirical, whodunit shows a master of classic mystery on top form.

The Case of the Monday Murders was originally published in 1936. This new edition features an introduction by crime fiction historian Curtis Evans.