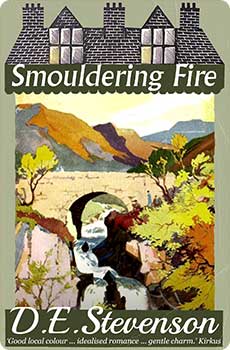 Despite his passionate love for Ardfalloch, Iain has been driven to let his home and estate to Mr Hetherington Smith, a wealthy London businessman, and his kindly wife (who was, truth be told, happier when they were poor).

MacAslan stays on in a cottage by the loch, aided by his devoted keeper Donald and Donald’s wife Morag. But he finds himself irresistibly drawn to Linda Medworth and her young son, invited to Ardfalloch by Mrs Hetherington Smith. Lush Highland scenery and a ruined castle set the stage for a mystery, and tension builds to a shocking conclusion.

Smouldering Fire was first published in the U.K. in 1935 and in the U.S. in 1938. Later reprints were all heavily abridged. For our reprint, Furrowed Middlebrow and Dean Street Press have followed the text of the first U.K. edition, and are proud to be producing the first complete, unabridged edition of the novel in eighty years.

“A charming love story set in the romantic Scottish highlands, with plenty of local colour, a handsome hero, a lonely, lovely heroine and a curious mystery into the bargain.” Sunday Mercury

“A tale in which those who love the Highlands will delight, for the minor characters are gloriously alive and the atmosphere is profoundly right.” Punch