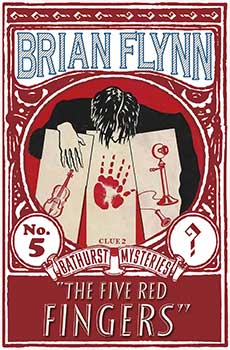 “Hard luck to be murdered just after your horse has won the Derby! Don’t you think so, Doctor?”

“Hard luck to be murdered just after your horse has won the Derby! Don’t you think so, Doctor?”

Julius Maitland, the millionaire horse trainer is excited about his horse’s chance to win the Derby. His wife’s horse is also strongly fancied. In a neck and neck finish, Maitland’s horse takes the race, his wife’s in second.

In a national sensation, the winner is disqualified. A telephone call the day after the race summons the police to a house where Maitland’s murdered body is found – and he has been dead for at least two days. When Sir Austin Kemble, Commissioner of Police is asked to investigate, he immediately summons his friend Anthony Bathurst. But can Bathurst make sense of a case when the stakes are this high?

The Five Red Fingers was originally published in 1929. This new edition features an introduction by crime fiction historian Steve Barge.

“The detective interest and the sporting interest are skilfully interwoven.” Northern Whig