One By One They Disappeared 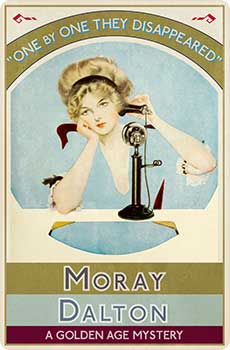 “I want to catch them. To do that we’ve got to lead them on. Now listen to me.”

“I want to catch them. To do that we’ve got to lead them on. Now listen to me.”

Elbert J. Pakenham of New York City is among just nine survivors of the sinking of the Coptic – not counting his black cat Jehosaphat. The benevolent Mr. Pakenham has made his fellow survivors joint beneficiaries in his will, his nephew having recently passed away. But it seems that someone is unwilling to share the fortune, as the heirs start to die under mysterious circumstances . . .

Then Mr. Pakenham himself disappears, and Inspector Collier of Scotland Yard suspects dirty work. When a trap is laid that seriously wounds his best friend at the Yard, Superintendent Trask, Collier is certain his suspicions are correct. Into his net are drawn a charming young woman, Corinna Lacy, and her cousin and trustee, Wilfred Stark; a landed gentleman of dubious reputation, Gilbert Freyne, and his sister-in-law, Gladys; an Italian nobleman of ancient lineage and depleted estate, Count Olivieri; and a Bohemian English artist, Edgar Mallory. But Collier will need some unexpected feline assistance before the case is solved.

One by One They Disappeared was originally published in 1929. This new edition features an introduction by crime fiction historian Curtis Evans.