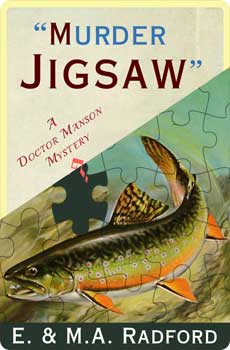 “Jiminy! He’s going to fish for him.”

“Jiminy! He’s going to fish for him.”

A small Cornish fishing hotel, The Tremarden Arms, is renowned for its adjacent waters where guests fish for salmon and trout. The unpleasant Colonel Donoughmore is found drowned in a salmon pool in the hotel grounds. He was dressed for fishing and his rod was on the bank nearby. The local Police concluded it was an unfortunate accident but Doctor Manson finds two peculiar circumstances which convinced him that this was a skilfully contrived murder. There were fellow fishermen out on the river banks near to where the Colonel was found dead, two of whom had publicly uttered threats against him. Furthermore, several other hotel guests had strong financial motives for removing him.

“If these Radfords can keep writing thrillers of this class, they are going to take their rightful place very near the top” Liverpool Evening Express