The Case Of The Haven Hotel 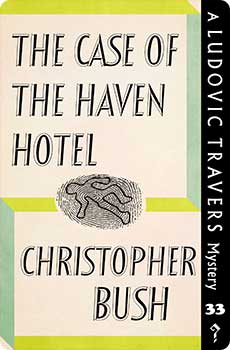 It was Murder Eve, and I was the last person in Sandbeach to suspect it.

It was Murder Eve, and I was the last person in Sandbeach to suspect it.

Ludovic Travers certainly isn’t anticipating anything remotely resembling murder, least of all his own. But when he is invited to a strange hotel, someone does turns up murdered, and in a most peculiar way. Travers, and his Scotland Yard supremo Superintendent Wharton, are not officially connected with the case, but still co-operate with the local police. The solution will be as ingenious as the mystery is baffling.

The Case of the Haven Hotel was originally published in 1948. This new edition features an introduction by crime fiction historian Curtis Evans.

“Christopher Bush is one of the good ones. Although he has written so many mysteries, the strange thing is that they all sound fresh, wide-eyed and dewy, as if he had written hardly any.” New York Herald Tribune