Veronica: The Autobiography Of Veronica Lake 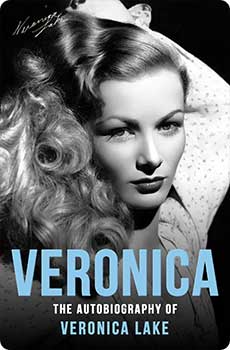 “What a sense you have for finding trouble and entering into it.”

“What a sense you have for finding trouble and entering into it.”

Veronica Lake remains one of Hollywood’s greatest icons, from movies like Sullivan’s Travels and The Blue Dahlia. Her trademark ‘peek-a-boo’ blonde hairstyle, partly hiding one eye, is a legend in its own right, but her blend of beauty, ice cool persona and dry comedic style makes the actress a timelessly magnetic screen personality.

The persona hid a tumultuous personal life, and this memoir holds nothing back. Born Connie Ockleman, the actress owed the soubriquet ‘Veronica Lake’ to a producer’s inspiration. She was a tough Brooklyn kid, with an ambitious stage mother calling the shots in her early life. After early successes in beauty pageants, the diminutive Connie headed to Hollywood, where, despite her headstrong nature, she became Hollywood’s biggest ‘it’ girl of the 1940’s.

But after brushes with the casting couch (she didn’t succumb), a string of doomed marriages, troubled relationships with her children, and remarkable stardom and fortune, Veronica Lake suffered a rapid fall from grace—ending up bankrupt and alcoholic in New York City. Happily she rediscovered her acting career in live theatre and enjoyed living in Miami for most of her final years, before she died aged only 50 in 1973.

This remarkable memoir (1969), a slalom of highs, lows, comedy and heartbreak, was co-written with Donald Bain. It has been out-of-print, rare and sought-after for many decades. Dean Street Press is proud to reissue it now, with a new introduction by broadcaster and writer Eddie Muller.