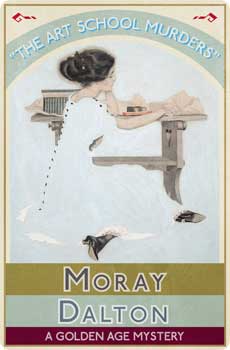 Artists’ model Althea Greville was, in life, known as something of a femme fatale. But the phrase becomes only too literal. What initially appears to be red paint leads instead to Althea’s dead body, murdered in Morosini’s renowned school of art. Hugh Collier of Scotland Yard is called in, but two more murder victims follow, one of them a female student at the school, stabbed to death at a cinema. After many a twist, Collier selects the right piece in the puzzle to identify a murderer operating under cover of England’s World War Two black-out.

It is a pleasure to accompany Hugh Collier in The Art School Murders as he suavely but relentlessly pursues, and finally brings to justice, a diabolically callous killer. This new edition features an introduction by crime fiction historian Curtis Evans.