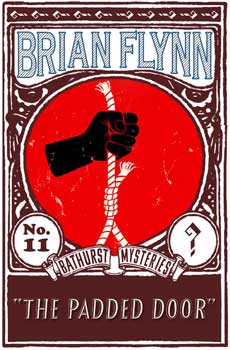 “The murderer must have crept stealthily behind Pearson and taken him all unawares—unsuspecting.”

“The murderer must have crept stealthily behind Pearson and taken him all unawares—unsuspecting.”

Leonard Pearson was not a pleasant individual – a likely blackmailer – so it came as no surprise when he met a sticky end. Attacked from behind, his head smashed with a blunt instrument, the only tangible clue lay in the identity of his final visitor. Captain Hilary Frant called on Pearson that night, and was heard threatening Pearson. And then his heavy walking-stick went mysteriously missing . . .

Frant’s family, once he is arrested, have but one recourse – send for Anthony Bathurst. But the trail is already growing cold. With the hanging judge, Mr. Justice Heriot, presiding over the trial, matters seem bleaker still. But an unexpected second death soon turns everything on its head . . .

The Padded Door was first published in 1932. This new edition features an introduction by Steve Barge.