Death Of A Beauty Queen 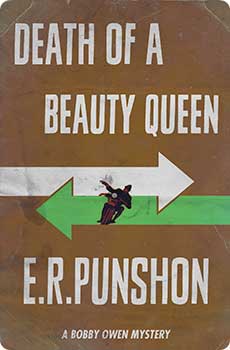 When a beauty pageant becomes the setting for murder, Bobby Owen has more suspects than he can handle – almost.

Mr. Sargent, the manager of the Brush Hill Central Cinema, wished he had never held a Beauty Competition. Caroline Mears, the predicted winner, had already caused trouble with one of the other girls. Paul Irwin, a strong Puritan and influential councillor, had taken it into his head to come backstage to look for his son Leslie, who hoped to marry Caroline against his father’s wishes. Just as the winner of the competition was being announced, different news spread through the cinema like lightning – Caroline Mears had been murdered!

Superintendent Mitchell of Scotland Yard and his young sergeant, Bobby Owen, were faced with one of the most puzzling cases of their careers. There were at least seven suspects, against four of whom an equally good case could be made out. There was Paul Irwin’s maddening reiteration that he had ‘nothing to say’ to all questions, and a multitude of confusing evidence, none of which fitted the main jigsaw puzzle. Conundrums abound in this whodunit: one which will keep even the most seasoned mystery reader guessing – right to the very last page.

Death of A Beauty Queen is the fifth of E.R. Punshon’s acclaimed Bobby Owen mysteries, first published in 1935 and part of a series which eventually spanned thirty-five novels.