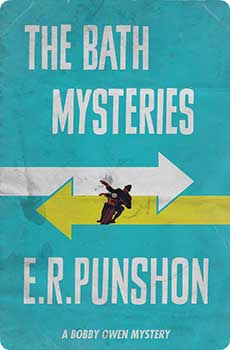 Bobby Owen is on a family case, investigating the death of his cousin. But how exactly did he die in the bath...?

Bobby Owen is on a mission of unusual delicacy, finding himself conducting an investigation which involves his own titled but impecunious family. This time the cards were stacked against Bobby. He knew full well the cause of his cousin’s mysterious disappearance, but he could not understand the baffling circumstances surrounding Ronnie Owen’s death. Ronnie was a drunkard, but even a drunkard has sufficient presence of mind to refrain from remaining in a tub of boiling water for thirty-six hours!

Was Ronnie’s death caused accidentally, or was it a deliberate case of murder? Moreover, why had Ronnie taken out a heavy insurance policy shortly before his death?

The Bath Mysteries is the seventh of E.R. Punshon’s acclaimed Bobby Owen mysteries, first published in 1936 and part of a series which eventually spanned thirty-five novels.

‘What is distinction? The few who achieve it step – plot or no plot – unquestioned into the first rank… in the works of Mr. E.R. Punshon we salute it every time.’ Dorothy L. Sayers

‘Mr E.R. Punshon is one of the most entertaining and readable of our sensational novelists because his characters really live and are not merely pegs from which a mystery depends.’ Punch