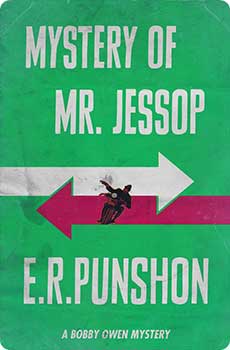 Who killed Mr. Jessop? Who stole the Fellows necklace? Who attacked Hilda May? Bobby Owen is on the case.

Who killed Mr. Jessop? Who stole the Fellows necklace? Who attacked Hilda May? The web of suspicion encompasses a dealer in ‘hot goods’, respected jewellers, a millionaire, an ex-pugilist, a playboy, members of the nobility, a hard-boiled moll and a girl who could not forget her past.

All the clues are there, as the indefatigible Bobby Owen works his way through a real peasouper of a London mystery and pierces the fog – displaying not only magnificent analytical powers but and admirable courage in the face of danger.

Mystery of Mr. Jessop is the eighth of E.R. Punshon’s acclaimed Bobby Owen mysteries, first published in 1937 and part of a series which eventually spanned thirty-five novels.

‘What is distinction? The few who achieve it step – plot or no plot – unquestioned into the first rank… in the works of Mr. E.R. Punshon we salute it every time.’ Dorothy L. Sayers

‘Mr E.R. Punshon is one of the most entertaining and readable of our sensational novelists because his characters really live and are not merely pegs from which a mystery depends.’ Punch