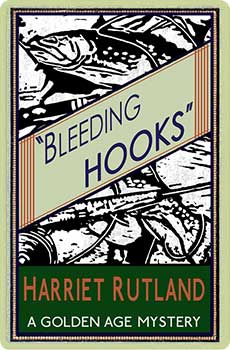 “Well, tight lines!” they called over their shoulders.

They grabbed their fishing bags, and made a dive for their rods which were standing, ready for use, outside the front door.

“Well, tight lines!” they called over their shoulders.

Gladys ‘Ruby’ Mumsby was more interested in fishermen than fish. When her corpse is discovered near a Welsh sporting lodge that is hosting a group of fly fishing enthusiasts, it seems one of them has taken an interest in her too – of the murderous kind. For impaled in the palm of her hand is a salmon fishing fly, so deep that the barb is completely covered. Her face is blue. It is thought at first she died of natural causes, but the detective Mr. Winkley, of Scotland Yard, almost immediately suspects otherwise. And what happened to the would-be magician’s monkey that disappeared so soon after Mrs. Mumsby’s death?

‘Once again a top-ranking yarn, in a story where the author introduces murder into a fishing paradise in Wales. Lots of rod and line marginalia add to incisive characterization and well hidden crime for a superior story.’ Kirkus Reviews