The Secret Of Greylands 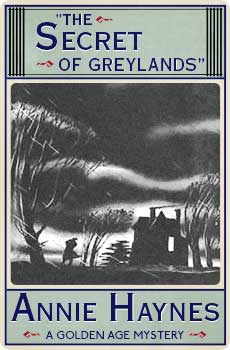 “there’s no dirty trick he wouldn’t play—it’s my belief that he wouldn’t even stop at murder!”

“there’s no dirty trick he wouldn’t play—it’s my belief that he wouldn’t even stop at murder!”

her husband unmasked as a scoundrel, lady cynthia letchingham seeks refuge at her cousin hannah’s north-country home greylands. but on cynthia’s arrival, she finds hannah an invalid, having recently suffered a mysterious paralysis; the house is devoid of servants, and hannah’s husband, charming and sinister by turns, keeps watch over everything and everyone. only the presence of charming sybil hammond and a darkly handsome neighbour relieve the atmosphere for cynthia – but then a dark red stain appears mysteriously on the sleeve of her coat…

what has really happened to hannah, and the other entangled mysteries along the way, make the secret of greylands (1924) an absorbing golden age crime novel matching wilkie collins’ high victorian gothic to the agility of early jazz age fiction. this new edition, the first in over eighty years, features an introduction by crime fiction historian curtis evans.

“not only a crime story of merit, but also a novel which will interest readers to whom mystery for its own sake has little appeal.” The Nation

“a most skilfully written detective story and the mystery is carried through quite brilliantly.” Clarion